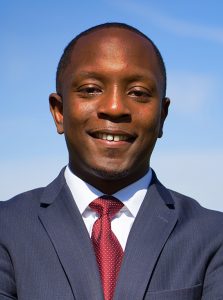 Courtney English believes in leaving things better than he found them. An Atlanta native who was first elected to the Board of Education at 24, he’s been making a difference in the lives of citizens from an early age. A graduate of Morehouse College, English earned his Master’s Degree from Columbia University after serving as a founding teacher at BEST Academy, the first all-male school in the city of Atlanta in 60 years.

When English was first elected to the Board of Education, the district’s graduation rate hovered at 50%. He rolled up his sleeves and went to work, championing policies to shrink the size of the central office and increase classroom spending. Today, after years of partnership and perseverance, both in the classroom and in the boardroom, the graduation rate stands at 71% and climbing.

Chosen unanimously by his fellow board members as the youngest chairman in the history of the school system, English led the negotiations to resolve a dispute between APS and the City of Atlanta over the Beltline. The deal he brokered ensures $100 million in new revenue for Atlanta’s students while keeping the Beltline financially on track.
Most recently, Chairman English led the district’s capital campaign—an effort that will generate $546 million over the next 5 years for APS and have an economic impact of over $2 billion for the region.

Under his leadership, the district has expanded parental choice, reduced central office spending and put more resources into the classroom. As an Atlanta City Councilmember, English will bring his results-driven, innovative brand of leadership to tackle issues of affordable housing, transportation, and jobs.

Courtney English is a proud graduate of Frederick Douglass High School, a member of the LEAD Atlanta class of 2011 and serves on the boards of nonprofits like the National Center for Global Engagement, Child First USA, and the Morehouse College Center for Teacher Preparation Advisory board. He works as Chief Education Officer of an education technology company and is frequently a guest lecturer at Emory University, Spelman College, Morehouse College and Harvard University.

Courtney in The News